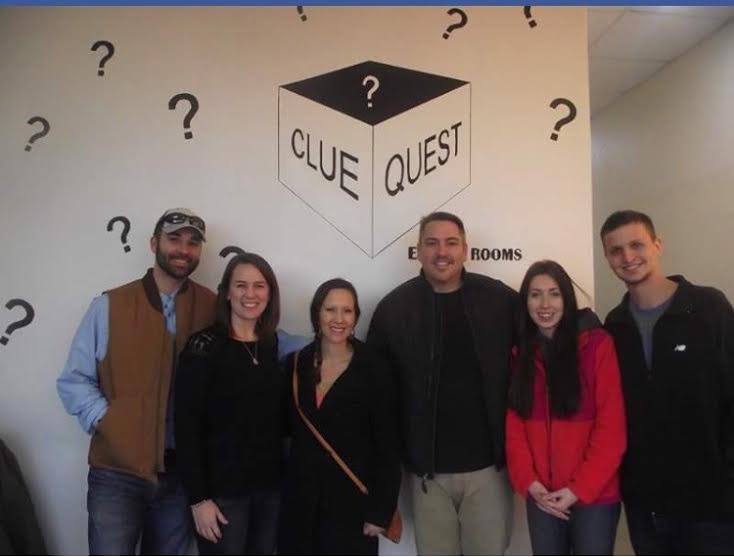 Imagine for a moment that you’re locked in a dimly lit room. In the room with you is a skeleton. On the door leading out of this room there is a keypad with a combination that only the two people holding you in the room know. Your way to freedom: unlock the mysteries held within the room in 60 minutes or you’re done.  <Insert dramatic ‘dun dun duuuuuuun’ here>

Oh, and by the way, people are not only longing to be locked up… they’re paying for it.

What gives is a new form of experiential entertainment sweeping the nation. That’s right, Clue Quest, located off 33rd between Boulevard and Broadway, is a game. But it’s not just any game. It’s certainly no Monopoly or Hasboro game of Clue. It’s better described as something like your favorite mystery novel or show come to life, with you thrust into the middle of it. That’s the essential idea anyway. You and your friends are put into one of three scenarios, locked into a room shrouded with mystery and told the only way to escape is to solve a myriad of clues throughout the room.

Ever since these types of games started becoming popular I’ve been curious about them. And so, the first week of January, I was pleased to find out first hand if indeed these games were worth all they hype. I’m happy to say that Clue Quest is.

Before reading on I want to let you know that I will not give any secrets that will spoil this game for you should you choose to go for it yourself. I hate when people do that.

So here I was, on a cold afternoon on the second day of 2016. Me, along with my wife and four other friends, paid to be locked up in one of these rooms. And yes, there was a skeleton. That belonging to the late Clara.

We chose the room Clara’s Diary after reading the online descriptions for it and the other two escape rooms Clue Quest has: Pharaoh’s Revenge and The Game Master. We chose this room because it seemed the darkest, the creepiest if you will, and I’m a Stephen King fan– though the other rooms all sound great as well.

After being told about Clara, her diary, her late loves tragic demise in the war, and given a few necessary do’s and don’t’s we were locked in with Clara. A clock on the wall told us how much of the 60 minutes we had left to escape. Creepy music wafted through an old time radio by Clara as we descended on the room, six grown adults, all intelligent individuals, trying to prove that we could do it. That we could escape; something 80% of the people who attempt this room fail to do.

By the way, that’s the highest percentage of escapes in all the rooms. The rest of the rooms hover between a 15 and 17% success rates.

Clues came quickly as the clock on the wall counted down. I thought there was no way we wouldn’t finish in time. I wasn’t niieve enough to think we’d break the 25 minute record…. but I thought we could get close!

Not for the first time that night was I wrong.

One minute passed. Then another. And another. Until finally, the final ticks counted down to our failure. And at 60 minutes on the dot the door flew open to reveal our smiling host. He’d beaten another group.

“I sure thought you all were going to get it,” he grinned at us.

He then proceeded to fill us in on our where we went wrong. The most maddening part? It was staring us in the face all along. Somebody had even mentioned the solution at one point, but took it in another direction– took it too far.

So was it worth the money?

Well, let me put it this way. After the game we went out to eat with our friends. A major topic around the dinner table was the game and its varying aspects. When we saw them at church the next day it came up again, one of them telling me he’d gone to bed thinking about that last puzzle we’d failed to solve!

Now that is the mark of something done well. Think about it. When you’ve seen an exceptional movie or sporting event is it not on your mind for hours and days following? Does it not leave you wanting more? Do you not wish to share and discuss it with your friends, only to be exacerbated by not being able to with those who haven’t experience it yet? Well that was exactly what this game was like for us.

And that is exactly why Clue Quest is successful. But Clue Quest is far from the only game of its type in the area. In fact these types of games are growing in popularity across the country. According to Mr. and Mrs. Collier, owners and proprietors of Clue Quest, when they began researching to start Clue Quest in Edmond there were maybe only 60 or so of these types of attractions in all of North America. Now, a mere 6 months after its opening in June of 2015, there are thousands.

But Clue Quest may be one of the hardest. Where some game of this type will allow for participants to receive clues and hints from a moderator or may even give unsolicited help the Collier’s prefer to leave you to it. And while this may lower success rates, how much better would it feel to succeed? I wouldn’t technically know since I didn’t, but I can imagine that I’d have felt pretty darn good about being in that 20%.

This is another reason for Clue Quest’s success. They don’t baby you. You’re rewarded for your efforts with a t-shirt if you succeed, but even more so mentally. It’s part of the reason why Mrs. Collier was able  to quite her day job to run Clue Quest. Part of the reason they are growing as a company. In fact, our warm and welcoming hosts Mr. and Mrs. Collier informed us that they were thinking about renting out the empty space next to their their slot in the building and expanding. They told us that there were a number of people who’d done all three games and were asking when they would be switching things up? Creating new rooms, as it were. But, as Mr. Collier.  said there is still such a high percentage of Oklahoma City, Edmond, and the surrounding areas that haven’t experienced the three games they’d already set up so it would be imprudent to invest much more money and time to change what is already a good thing. That’s why getting the space next to them would be good. They say that if they do this they may make a 2 room 90 minute escape scenario and have an additional room which they change out every three months or so.